You can see squirrels in both healthy and unhealthy conditions. Some squirrels are extremely ballooned even to twice their original size. So, which one is the fattest squirrel in the world?

Probably, it’s from Red and white flying squirrel or western woolly. They are more giant than other squirrel types. When winter arrives, these squirrels start gaining extra weight.

They take extra food and so, they gain huge weight. Some of them can gain up to 50% weight. In urban areas, they are entertaining animals to people. People give extra food to squirrels and so, they become fatter.

Fattest squirrels in the world

The largest squirrel in the world is a red and white flying squirrel. They can weigh up to 9.5 pounds. Many other squirrels from different corners of the earth get extremely fat. Squirrels gain extra weight to help insulate them from the cold weather. The fatter the squirrel, the safer from the cold. Let’s get introduced to some fattest squirrels in the world.

They are up to 61 cm or 2 ft. long. Zoologists found that they belong to the genus Protoxerus. Their prime food is fruits and seeds from trees. Forest giant squirrels typically have short and rigid fur hairs. The hairs are individual and come with a black base along with black tips.

Kashmir Flying squirrel is native to Northern India, Pakistan, and Afghanistan. People misunderstand by hearing their name. They can’t fly in real life but they can amazingly cross long distances. They glide over long distances by jumping. Dealing with big heights isn’t a problem for them. They have a parachute-like flap of skin connecting wrist to ankle. It helps in safe landing while jumping.

Their weight ranges between 2 to 4.4 ounces. In the winter season, they start gaining extra weight. Their bodies go through huge inflation and they just look like a football shape. Kashmir Flying squirrels can gain an extra 25% weight to protect themselves from winter.

Believe it or not, this type of squirrel can weigh up to 6.3 kg. Yes, that’s huge and the astonishing matter is they are capable of weighing up more. They are the largest ground squirrels observed in North America.

This kind of squirrel can be around 1.4-2.5 Kg. The weight varies depending on the height of the squirrel. People often try to find similarities between this type of squirrel and western woolly. For your kind information, they are of different origins.

They live on the slopes of the Himalayas. Outside of Asia, they are rarely found. Among all gliding mammals, this type is the heaviest one. During winter, they turn into one of the fattest squirrel origins in the world.

The red and white flying squirrel is nocturnal like the flying fox. Its food habit is based on nuts, seeds, leaves, and small insects. In the winter season, it increases its food collection speed. As a result, they get fatter and gain more weight. Some of their units are the fattest squirrels in the world.

Why do squirrels get fat?

Squirrels get fat due to survival in critical situations. When it’s winter, they can’t tolerate extreme cold.

As a result, they start using the fat to protect their body from the cold. Researchers were puzzled when they observed the first dramatic obesity of squirrels. Squirrels in urban areas or zoos get fat rapidly due to human beings.

People give them extra food and squirrels never refuse to eat any of them. The winter is the best season to travel and so, they get extra food during that time.

Many squirrels do achieve huge weight. It’s just a natural process among the squirrel community. Common gray squirrels are capable of increasing their weight up to 25 percent. It’s only possible for them when it’s the harvest season. Science says that squirrels can gain up to 50% of their real weight. However, it’s risky for the lifespan of squirrels in some cases. 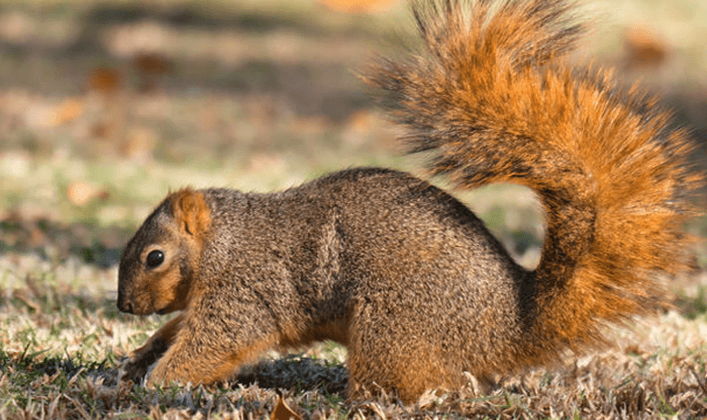